Translated from Japanese: I deliciously steamed it with salt, pepper and white wine while it was frozen. I had a good meal.
The sizes of the fillets are quite different, so I reduced my review by one star.

Translated from Japanese: The taste is solid. It seems to be easy to dry and it seems that it’s suitable for cooking such as steaming, frying or sautéing with butter to trap the water. It's also nice to have a sense of security that something with such high safety is frozen and therefore always available.
The processing content said that it had a peeling process, so when I put it in a shabu-shabu pot as it was, it became covered with scales ^^; Doesn't the fact that the scales are attached mean that they have not been processed at all?

Translated from Japanese: I had it sautéed and in a stew.
I was worried that there would be fish scales.
It tastes better than the same deep-sea fish cod (from the supermarket).

Sometimes I can feel a slight fishy smell, so I’d like to try other cooking methods.

Translated from Japanese: It's my first time trying it.
It was very delicious when seasoned with organic butter and soy sauce! I will buy it again.

Translated from Japanese: It’s a very elegant white fish with no odor and a soft texture. It doesn’t shrink even when boiled, sautéed or fried and it looks elegant after cooking, so I use it as the main dish for guests. It’s a fish that will impress your guests.
Since it’s a deep-sea fish that is related to cod, the taste is very similar to cod and it’s slightly pale and has a mild flavor, so I recommend using seasonings such as butter, herbs and spices to add accents. Translated from Japanese: It’s my first time purchasing fish here at Horizon Farms. Salmon from local supermarkets can’t be trusted and it’s my first time having salmon that I know where it’s coming from. This high quality raw salmon is delicious! I was very happy.

Y
Yahoo
A gem that can be the main dish

Translated from Japanese: When relatives gathered, I mainly served steak and sausages. I thought that the elderly and babies wouldn’t be able to chew so much meat, so I ordered only one of this. But because everyone liked and asked for it, I plan to order three of them next time.

Translated from Japanese: It was delicious. I'm sorry for not saying much, but it's just delicious and wonderful salmon.

Translated from Japanese: Thank you for your prompt response and careful packing. I want to order again.

Translated from Japanese: I order this salmon every time. It's really delicious. Translated from Japanese: I was looking for salmon that I could eat with a peace of mind, that’s how I got here.
I can't always eat Japanese smoked salmon. The taste of this one is really natural and delicious and I didn’t want to waste any I finished it immediately.
I will purchase it again!

Translated from Japanese: When I eat this, I don't feel like buying anything from other stores anymore. It was delicious.

Translated from Japanese: This is really delicious, so I'm buying it again!
It’s a delicious smoked salmon that is moist and has an exquisite saltiness. At my home, we put rice and this salmon on seaweed and roll it with wasabi soy sauce or organic mayonnaise soy sauce. I recommend it because it’s very delicious.

Translated from Japanese: It's my first time.
It’s moist and delicious smoked salmon.
The saltiness is exquisite and delicious.
I'm glad that the ingredients and the smoked salmon process are made with care.
I will order again!

We tried the 500gr pack for 3 and it vanished without a trace in no time: Excellent taste, lovely in the bite. We tried some other smoked organic salmon alongside but no comparison.
An absolute feast dinner just with toast and Champagne! We will reorder. Translated from Japanese: Until now, I didn't like salmon because I didn't like the bad smell that remained in my mouth, but this salmon is different!
It’s not greasy and has no unpleasant odor.
The fishing method is also wonderful and you can safely feed your family.

This salmon is very helpful for my elderly cat, who has recently become thin and worried me with its weightloss.
It’s a product that I want to keep on hand in the future. Translated from Japanese: I made meunière (French dish) using this cod! I just put it in the refrigerator the day before using it and did not prepare it beforehand, but it was soft and delicious. It seems that it can be used for various dishes. Large-capacity packs are often troublesome because they cannot be used up, but this was convenient because it can be used piece by piece and the zipper can be closed and stored. I was at a loss because there were various types, so I would like to try a different type next time. 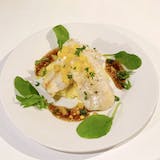 Translated from Japanese: Since it weighs 1.2kg, it’s very large, so I cut it into several pieces. Even though it’s sashimi it doesn’t smell fishy and is very delicious. I'm also happy that I can use Horizon butter to grill butter in soy sauce. It’s soft and delicious even when baked.

Translated from Japanese: I finally ate it after it arrived. I thawed it in the refrigerator for a while, cut it into fillets and re-frozen it again immediately. It's amazingly delicious. It didn't smell fishy at all even from the moment I cut it. I sprinkled salt, black pepper, herbs and some olive oil on it before cooking it over low heat for 20 minutes. It was really delicious because it was crispy on the outside.
It’s also great that it didn’t fall apart while cooking it.

Translated from Japanese: I have bought it many times.
I’m very satisfied that I can eat it with no worries.
I was very happy when I sent it to my relatives the other day.
I was surprised and impressed by the big salmon.
It’s delicious to have wasabi and soy sauce, but it’s also delicious to mix with sesame oil, soy sauce, avocado and eat it like a salad.
I will buy it again!

Translated from Japanese: I have ordered many times.
It tastes very good.
However, there are some bones that have not been removed every time.

Translated from Japanese: I ordered for the first time.
I was looking for a high quality salmon with high safety, so I am glad that I was dealing with that salmon here.
I tried to eat it at once.
It was a very delicious salmon that didn't disappoint. I want to order this again! I recommend it. Translated from Japanese: I haven't tried it yet, but it seems to be convenient because it’s frozen one by one without solidifying. I'm looking forward to eating it.

Y
Yahoo
Buying it was the right decision!

Translated from Japanese: I haven't eaten fish other than salmon and blue hake for the past few years, but I missed this fish and bought it. After making meunière / tai-chazuke with sea bream / boiling it in tomato sauce, I wondered if children can make sea bream rice with this? I didn't want to say it’s impossible, so I decided to challenge it! It's easy to use and it seems that one can make various dishes, so I came to buy more today. Thank you for the always delicious meat and fish! Translated from Japanese: I haven't eaten it yet, but I'm looking forward to cooking it. I want to try boiling it with tomatoes.

Translated from Japanese: I lightly seasoned it and boiled it in a flat pot. It was a very delicious fish with a chewy texture and a lot of flavor. It was natural and had no additives, so I was very happy to be able to eat it safely and deliciously.

Translated from Japanese: I thoroughly put salt and pepper and on top of the skin to make Meunière. It's very delicious. It's also very helpful that you can store safe and secure fish in the freezer. Translated from Japanese: Recently, the number of natural fish has increased and I’m very grateful for that.
I made a healthy fish with a high protein content.
I lightly dipped it in flour and fried it and it was soft and chewy, which was great.
I’m happy to be able to buy natural white fish at this price and quantity.
Also, it would be convenient to put the fish in a bag with a zipper, so you can take out only the amount you need. I would appreciate such an improvement.
I’m ordering again. Translated from Japanese: Good salmon has arrived!
I thought it was a little thinner than I had imagined, but the fat paste was just right and it was very delicious. However, at home, it's hard to dismantle a large salmon, so I think it would have been better if a single instruction manual on how to dismantle it was included. However, I’m satisfied with the taste, so I’m giving 5 stars!

Translated from Japanese: For some reason, I managed to not eat sashimi for about 10 years, but when I saw this salmon, I couldn’t hold back and bought it
When I made sashimi and put it on the table, everyone devoured it silently. I reconfirmed that I could eat it with a peace of mind and came to buy it again today. It's best to peel the skin and bake it in the oven and eat the crispy salmon skin with boiled rice tea, so I dared to eat it with the skin on. Thank you for always providing safe products! Translated from Japanese: South Pacific fishing & NZ local processing & belly freezing ... It's a rare and valuable item for me.
I searched the internet for frozen fish caught in the South Pacific. However, the processing was mostly in China.
Moreover, since it’s mainly for business use, I gave up because the amount was too big, such as 50 pieces.
I was looking for a "no smell" fish that could be used in non-fish-based dishes because I wanted to increase the fish intake of my elderly family members. Since it has no bones, isn’t greasy and doesn’t smell like fish, I put it in a rice cooker while it was frozen when preparing cooking it with wild plants or when cooking porridge and there was no fish smell and no fish oil. So the cooked rice was like a lot without being slimy. Tempura and fried foods are especially suitable and when fried, it becomes chewy and delicious. Since it has no bones, it can be safely served to the elderly. I bought two bags and cooked one by frying, baking and cooking and I plan to take advantage of the characteristics of fish by using the other bag to make "chawanmushi" (savory steamed egg custard with assorted ingredients) and "Southeast Asian-style denbu" (mashed and seasoned fish).

Translated from Japanese: Very easy to use. It can be used as it is to make Meunière or to cook in a pot. It seems to be fish that is easy to cook. Translated from Japanese: It’s a fish with a taste and texture similar to Thailand fish. It's thick, fat, and delicious. It's boneless, easy to eat, and I'm very happy to be able to eat delicious fish that isn't sold at supermarkets.